As I sit here on a Sunday afternoon, relaxing after a fantastic and overwhelming few days I wanted to share some reflections on the fantastic conference that was the Microsoft Partners in Learning Forum.

This was my second year attending this wonderful, and free, event and I was quite relieved by the lack of snow for my travels home this year!

I arrived in Reading in time for the Innovative Teachers meet on Wednesday evening that took place in the Royal Tandoori restaurant. In this meeting we were treated to a variety of  short presentations on various practices involving the use of technology. We saw presentations on the following: 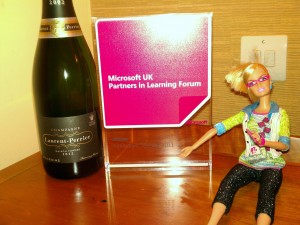 At the end of the evening, Stuart and Dan presented the ten prize winners of the Innovative Teacher Awards with beautiful glass awards and bottles of Champagne, it was a true honour to be one of the ten and I allowed GeekyBarbie to look after my award back at the hotel later.

On Thursday I arrived at Microsoft TVP shortly after 8am to set up my stand to display my project, once this was set up I left 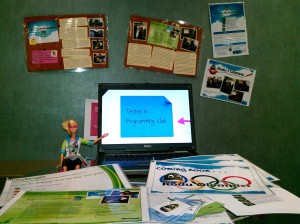 GeekyBarbie in charge while I headed upstairs to prepare for my workshop on Kinect and Kodu which I was running with Ray Chambers  (@Lanky_Boi_Ray).

Once I’d set up my laptop in the workshop room I hurried back downstairs to chat to the many delegates about my Virtual Classroom Tour on the use of Kodu. I was surprised by how many people were interested in my project and what I had to say. I made lots of contacts during this time, as well as at breaks and lunchtime.

Before the workshops began it was time for the keynote speakers and first up was Ian Livingstone and I have to say I was in awe throughout most of his speech. Firstly he is the co-author of the Fighting Fantasy series of books, of which I read many as a child, in fact they are probably still sitting in my mum’s attic! During his talk he gave a journey through the history of computer games and it was fascinating to be taken back in time to some of the games I remember from my childhood, including those on the infamous Atari! He talked about his work with Domark Games and then with Eidos and his contribution to Tomb Raider, showing a video of the newest version of the game to be released next year:

As you can see, the graphics are phenomenal and at first I struggled to work out whether these were real or CGI! This led into the discussion of the skills gap created by ICT education in the UK, and how STEM skills should really be linked to art in order to make young people more employable if they wish to progress into a career in visual arts and special effects, whether it be for games or film.  He made some very interesting points about how we should be teaching more computer science in classrooms and not just how to use the applications (which can be taught in a fairly small amount of time). I felt totally inspired, listening to him. You can read more about Ian’s proposals with NESTA here.

Next up was Ollie Bray, whose blog I have been following for a while, and I was very excited to be hearing from him in person. He talked about how he had been using games in the classroom to engage students, firstly with how Sim City could be used within Geography and then the use of Guitar Hero, which was used as a “hook” to engage primary school students to work together on a transition project in teams, bringing together a variety of curriculum subjects. This was another truly inspiring key notes speech and has given me some ideas for projects to use my Xbox in school . . . watch this space! 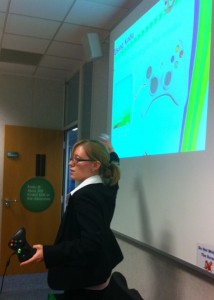 Next it was time for the workshops, and I worked with the fantastic Ray Chambers, delivering a workshop on Kinect and Kodu. I delivered the first half, talking about and demonstrating how Kodu can be used in both ICT and as a tool to enhance Literacy. T 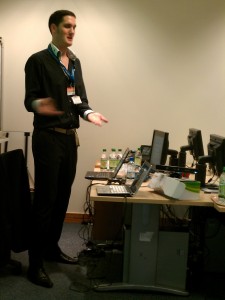 hen Ray talked about how he had been using the Kinect to engage his students when delivering his unit on databases and how it had progressed from there, he has also developed software for teachers of other subjects (particularly music) on request, which I find totally amazing, I don’t know how he finds the time! He’s such a nice guy. He gave a great hands-on session, giving everyone a chance to program their very own Kinect application using C#, with most of the delegates doing so successfully (even with no previous programming experience!)

At the end of the day we gathered in the auditorium where Stuart Ball talked about the excellent Partners in Learning network, which is truly brilliant and has had a huge impact on my teaching over the last couple of years. He then began to announce the four winners of the UK Innovative Teacher awards and I was totally gobsmacked to hear my name called out alongside Ray Chambers, Katie Boothman and Sarah Coombes, we each received an Xbox for our schools and an invitation to the European awards in Lisbon. It was such an overwhelming and amazing experience, I was literally shaking with excitement afterwards!

This amazing day was brought to a close firstly by Alex Bellos and his adventures in numberland, here he talked about Chinese Maths and demonstrated how to multiply numbers by drawing them as intersecting lines, it was incredible and I’m eager to show it to my maths department in school.

Lastly we heard from Taking it Global and their work as a social network bringing young people together to look at global issues.

Thank you, once again Partners in Learning, for another fantastic and inspiring event!

One thought on “Microsoft Partners in Learning Forum”