I would like to share with you some of the highlights I found at the BETT exhibition on Friday. My first stop was the Microsoft stand where the speaker was showing an excellent demonstration of three products, Live Photo Gallery, Autocollage and Live Mesh. I found the most interesting product to be Autocollage which, as its name suggests,  will automatically create a collage from a given selection of photographs. I downloaded the trial edition from Microsoft to make the collage you see below but unfortunately it adds a watermark to the bottom so I may actually purchase the full product for £18! 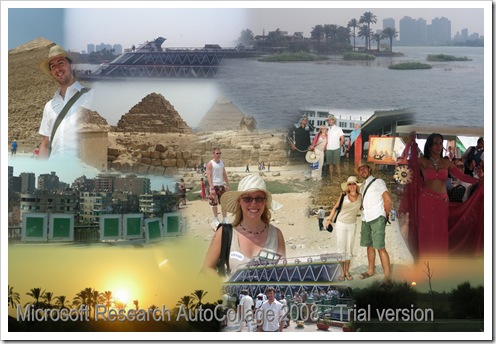 Following this there was a demonstration of Microsoft Surface, a product I have been interested in since I saw a video some time ago. I was lucky enough to be invited on stage to try out Surface, using a DJing program in which you use your hands to drag and drop various instruments onto the “decks” on screen to make music. One of the particularly innovative features of Microsoft Surface is its multi-touch technology which means it can be used by more than one person at once. This technology has also been utilised for enlarging/shrinking pictures on screen by “pulling” them inwards or outwards.

Here is a video which demonstrates some of the features of Microsoft Surface:

Next my obsession with anything robotic led me to a range of different stands . 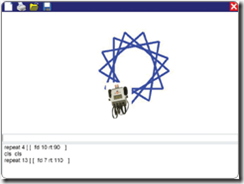 The first being Lego Mindstorms, although as I already use this in school there weren’t many new features to look at here except a new piece of software made by 2Simple called 2control NXT. This is a simplified version of the Mindstorms software allowing, among other things, users to convert the Lego robot into a floor turtle using the Logo programming language. I found this quite interesting, especially if I can find a way of getting my Lego robot to hold a pen! 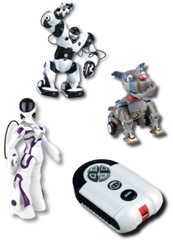 A captivating site were the dancing Femisapien robots on the Go-Robo stand. Go-Robo have produced an ingenious  product and software which allows you to program any of the WowWee robots (Robosapien and friends) using the computer and infrared device.

The software costs £60 and the infrared device is £25. Of cause the expensive part is purchasing a robot but luckily I have the Robosapien V2 sitting in my loft at the moment (due to a lack of space) so I will be bringing him into school to try out my purchases with the students. For more information go to www.q4technologies.com.

There were several other robot stands that attracted my attention, each one lets you build your own robots and program them (I wish I had an unlimited budget!), but I won’t bore you with my account of each one on here as you’re probably not as geeky as me! However, if you wish to take a look for yourselves here are the details: 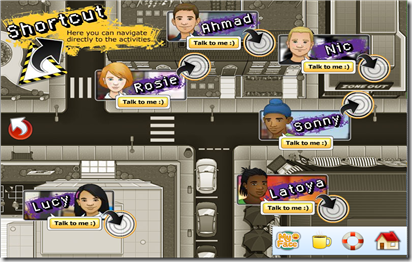 An interesting find in the field of Internet Safety was a learning activity called Us Online. With an extremely student-friendly interface Us Online gives students the opportunity to learn about Cyber Bullying, Social Networking, Online Gaming, Security, Instant Messaging and Sensible Searching. The resource is very interactive and from the demonstration I was shown it looks like an enjoyable way to learn about these important issues. The only downside is the cost at £280 Per Annum so I will need to speak to my head of faculty very nicely I think! For more information go to: www.roareducate.co.uk.

My final stop was the Serif stand where they kindly gave me some free software and  I learnt that if the school buys a licence for the software Serif will provide us with free OCR Nationals Units (that have been approved by OCR). My main focus here was the animation software which is built into DrawPlus, it’s almost like a scaled-down version of Flash, simplified so will be very easy for the students to use. At the moment for Unit 20 students use Animation Shop to create frame-by-frame animations which is quite primitive in comparison to the tweening method used by DrawPlus and Flash.

Well that’s it for my summary of the BETT exhibition, please contribute by adding comments if you spotted anything useful I have missed.