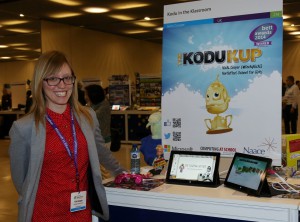 Last week I had the privilege of joining 250 educators from around the world in attending Microsoft in Education’s Global Forum in Barcelona. I arrived on Monday evening and was ready to set up my stand bright and early on Tuesday morning! I received my invitation to the event after winning an award at the previous Global Forum for my Kodu in the Klassroom project. All previous winners became Microsoft Innovative Expert Educators for a year  (along with many others through a selection process) and I was there to showcase the progression of my project over the past year. Throughout the rest of the day we were given a few different talks and took part in a team building exercise with the groups with which we’d be working later in the week. 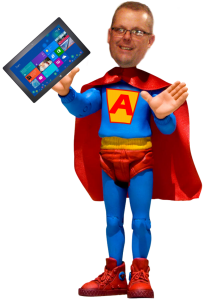 One highlight of the first day was the talk from “App Man” himself, Stuart Ball, talking about various apps that are available on Windows 8 devices, check out his blog post for the full roundup. Some of my favourites are:

The following day was the start of the opening key note speeches which began with Jan Muhlfeit (European Chairman of Microsoft), Jan highlighted, for me the importance of my subject from a careers point of view, the fact that their are 900,000 ICT jobs in Europe that are not fulfilled is something I can certainly stress to the young people I teach. He also made an interesting point when he posed the question: “Is Mercedes a software company or a car company?”, the answer seems obvious but he pointed out that 60% of their budget is actually spent on developing software! I found this amazing and wondered how true this must be for many other businesses that we wouldn’t necessarily categorise as the “IT Industry”!

During the speeches we were also introduced to BizSpark which gives three years of free software, support, and visibility for startups. We also learnt about the Imagine Cup, which is a Global student technology competition with categories of Games, Innovation and World Citizenship and this has some great prizes to offer. Well worth checking out!

Next up was the much anticipated keynote by Anthony Salcito, Vice President of Microsoft Education Worldwide, he told us about Microsoft’s new CEO, Satya Nadella and his passion for education. Anthony delivered a very well thought-out scenario, demonstrating the use of some key technologies and tools and showed how they neatly synchronised between home and school from both a teacher and student’s perspectives. He showed so many interesting new and upcoming applications throughout his demonstration, it was difficult to keep up! Some particular highlights for me were:

He also demonstrated a fantastic use of Skype in school, shown in the video below:

Another thing I didn’t know is that on the Partners in Learning site there are curriculum resources posted every day that are themed around the Bing home screen.

On Wednesday the UK team introduced some of our European friends to the concept of a TeachMeet which was put together by Stuart “App Man” Ball and David Rogers. I worked with Ray Chambers to tell people about our experiences with the Hour of Code, while David Renton introduced us to xGames, a game that enables a teacher to make a quiz for their students to answer in groups using Xbox controllers, I hate to gloat but my team won his example quiz in the TeachMeet!

The last couple of days brought us the Learn-a-thon; this was a 24 hour activity in which we were divided into groups with peers from different parts of the world to design a learning activity that displays innovative use of technology in the three Millenium Development Goals of Poverty, Sustainability and Gender Equality. Our group were asssigned Poverty and investigated the use of Project Siena to develop a tourism app to bring visitors to poorer parts of the world. Two of our group members were from South America(Puerto Rico and Ecuador) and they highlighted the fact that tourism is what is needed in their countries to combat poverty.

I have to admit, this was the part of the event that I had not been looking forward to but actually I found it to be a thoroughly enjoyable and worthwhile activity, despite the language barriers. I was very thankful for the Bing Translator app on my Surface which enabled myself and Paula from Finland to communicate with our two Spanish-speaking team-mates when our interpreter was not around. Here’s an overview of the project we came up with:

My role was to focus on using Project Siena, a tool for creating apps, to develop an example app that would be similar to what our students may produce. Once I got started (after watching a few tutorials on Youtube) I found it surprisingly easy to use and developed a semi-professional looking app by the end! Well done to the rest of Team 51 for all the effort you put in, even though we didn’t win the competition I’m really proud of the work we produced! 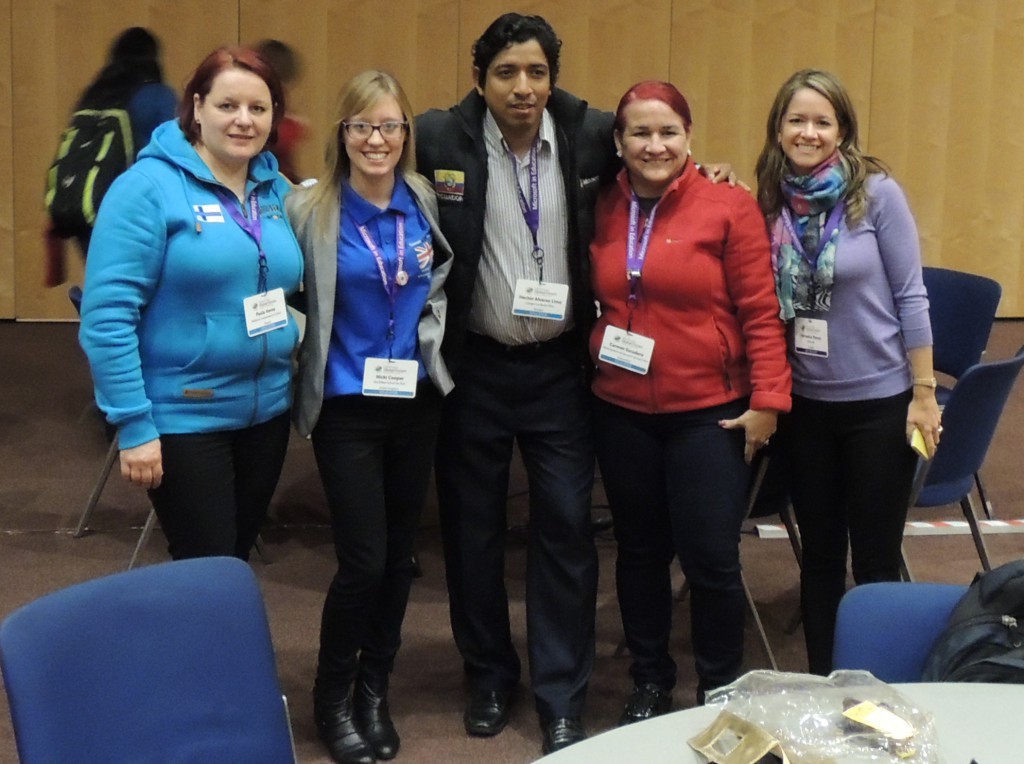 The event ended with the Gala dinner and awards ceremony and I was delighted that the OffPerts, Scott Wieprecht and his team of lovely students won an award in the category for “Cutting Edge Use of Technology”, I was also pleased that fellow team mate in Group 51 above, Paula Vorne, won an award in the same category for her use of Kodu in entrepreneurship. Here’s the whole of the UK educators team celebrating after the dinner: 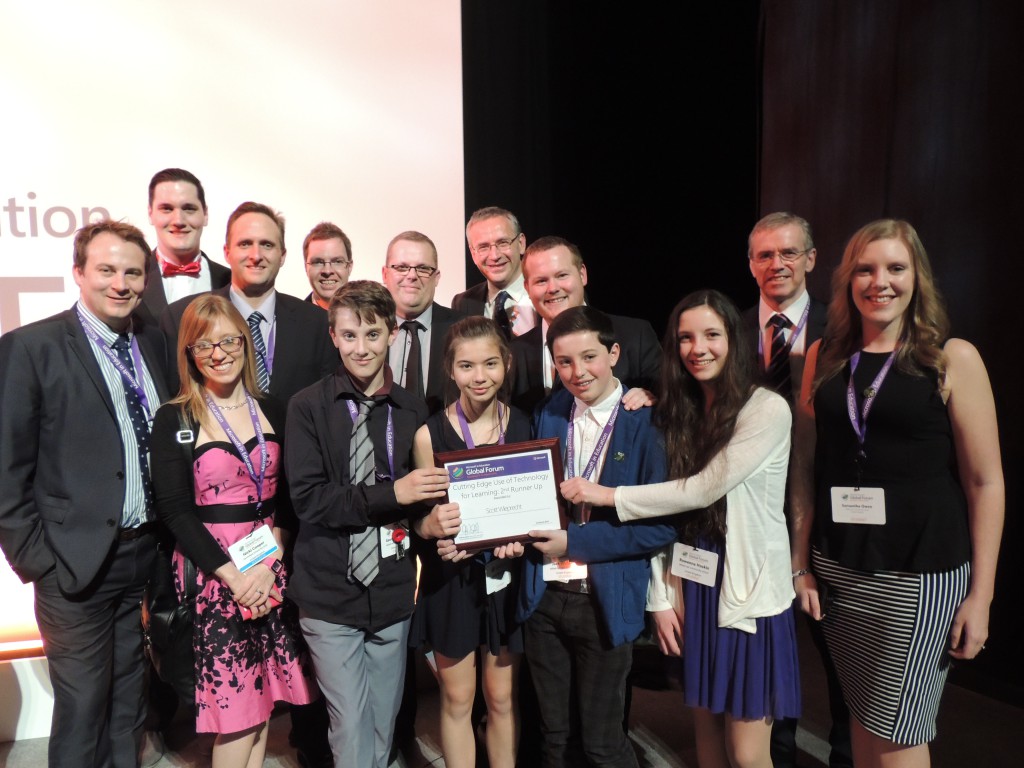 So is there anything I would change about the event?

Maybe just one thing. In future events I would like to see more workshop-style activities run by my fellow educators (this is how the UK Forums used to be delivered). There could be different activities which we sign-up for, I know lots of people would have loved to spend time with my colleagues Ray, David and Simon to learn more about how to use TouchDevelop. I would have been happy to deliver a session on Kodu. I would also have loved to hear more about exactly how Zana from Kosovo was running her Technician club or how Todd’s students from the USA were creating their content. We had 250 “expert educators” present and I feel there was a lot more to be learned from one another. That’s my only criticism, as I’m not going to discuss the coffee (or lack of)!

Finally, some key messages and points to take home:

I’d like to close with the following quote from Anthony Salcito, Vice President of Microsoft Worldwide Education: