Last Thursday represented the second annual Koduthon hosted at Microsoft HQ in Reading. The Koduthon is a basically a hack-a-thon style event where around 100 children were given the opportunity to enter the adult world and develop a solution to a given scenario in Kodu Game Lab. They were given a really interesting task involving developing a virtual fish tank. This proved to be an excellent exercise as it suited a wide range of abilities. They were given the basic concept of fish swimming around the tank along with suggestions of extensions they could make to this, such as:

Really, the list is almost endless as given more time the goal could be to create a complete, self sustaining underwater ecosystem. I’m thinking about adding this into my Kodu scheme of work, perhaps as a homework excercise. 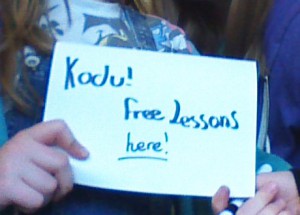 In our school minibus myself and a colleague brought a group of fifteen girls to the event who were also given the extra opportunity to train up Microsoft employees in the world of Kodu. They had great fun doing this and I was really proud of their confidence and teaching abilities, demonstrating patience and good manners throughout. They were even giving certificates out to the staff who took part in their training and they carried out interviews afterwards. 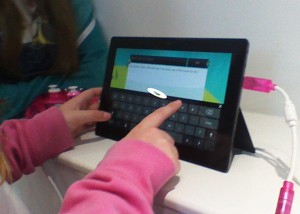 To carry out the work on the day the girls brought laptops with them from school along with some Microsoft Surfaces, I have to say I was quite impressed with the tablets. They ran Kodu all day with no hiccups and the batteries were still going by the end! If our school ever goes down the route of one-to-one devices I will definitely be recommending these, also having the USB port proved useful as they were able to utilise both the touch screen and game controllers.

The girls were buzzing in the minibus on the way home (and I’m sure it wasn’t just the supply of pick-and-mix sweets on the way out!). This was an amazing opportunity for them and one, I know, they won’t forget. A big thank you goes to Stuart Ball of Microsoft for putting on this fantastic event.