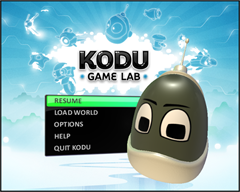 I have recently been trying out some new games development software by Microsoft, called Kodu. Released on Xbox last year it is now available on PC as a technical preview from here.

The software is great as it allows users to create 3D computer games in a very simple and intuitive way.

To give you inspiration Kodu comes with a large selection of built-in worlds or you can create a new one from scratch. 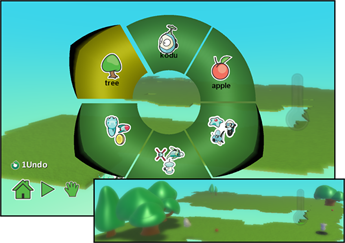 From the menu at the bottom there is a  terrain tool to create a world, you can choose from lots of different textures or patterns and also raise or lower the terrain.

Once you have created the terrain you can choose from a vast array of objects to add to your world.

After you have added objects and characters to you can program them using the simple graphical interface. This works by assigning actions to events (WHEN x happens DO y). There is a great deal of flexibility here giving you a lot of scope to make the game exactly how you want it.

The example below show a program for the enemy character in a game. WHEN it see’s Kodu (the main character) it shoots at him. The + symbols can be used to refine the event or action:

Well that was just a short overview of Kodu but I simply can’t do it enough justice by writing about it here. I would definitely recommend downloading and trying it out. I can see Kodu having a real impact in the classroom and am really looking forward to the final version being released. If you are interested in the use of Kodu you may find some of these resources useful too:

One thought on “A Snapshot Tour of Kodu”