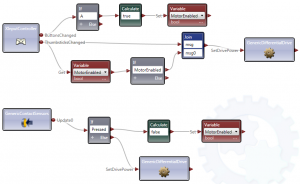 I have recently been playing with Microsoft Robotics Studio using the visual programming language to program my Lego Mindstorms robots. The flexibility this offers is fantastic, not only can you use it to control a vast array of different robots but it also acts as an interface for other hardware too, including web cams and Xbox controllers. After reading a very insightful guide over on Channel 9 I managed to create a simple program to control my robot directly using my Xbox controller. 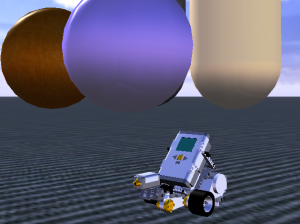 The bonuses don’t end there though, if you want to try out your program without having to connect to your robot you can change to simulation mode which brings up a virtual robot and environment on screen to use for testing, this saves a lot of time when it comes to debugging!

From this I have decided to host a Robot Wars competition in school. I have moved my programming club to Thursdays after school to give us more time. 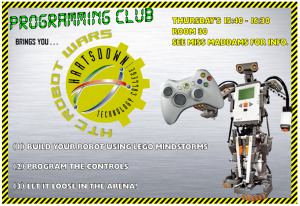 The students will have the opportunity to build their robots and learn how to program and control them in real time using Xbox controllers. The technology faculty have agreed to build an arena, so I just need some keen students and some bluetooth adaptors for the netbooks! I’m very much looking forward to this project, I may even attempt to expand to a local primary school too if it all goes well!

If you, too, are interested in trying out the robotics studio, there are some great tutorials to get started available here. There are also some building guides to help the students on the following sites:

A final quick note, I’ve changed the Robot Wars rules slightly to accommodate for my Lego robots so I don’t end up with lots of broken Lego pieces! Instead, the robots will need to hold a ball and the winner will be the first team to knock the ball off of their opponents robot.