Throughout this year I have been working with Stuart Ball from Microsoft one day per week on their UK Kodu Kup competition. Before the launch I was responsible for producing a lot of the teachers’ resources and was part of the launch event at BETT back in January. Since then I have been out and about visiting schools, delivering teacher-training sessions and have even visited the House of Lords promoting the competition (alongside my other mission of girls in Tech!).

My role also entailed downloading, playing and collating each of the entries ready for the final judging and I was later honoured to be asked to form part of the judging panel on the day which I was really excited about; although I underestimated how difficult this job would be! 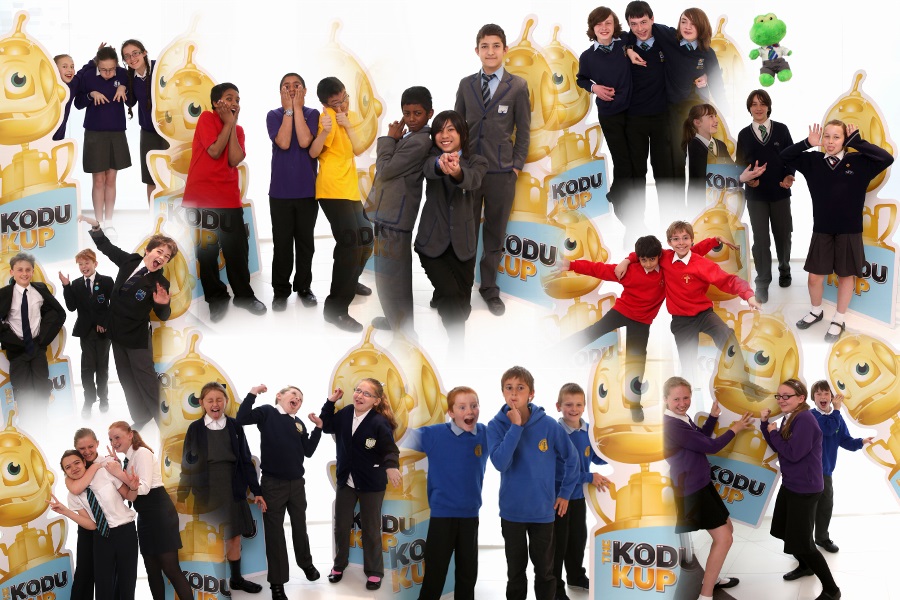 After a long wait, on Friday the final of the Kodu Kup had at last arrived  and took place at Microsoft HQ in Reading. Eleven teams were competing to receive the Kodu Kup Gold award along with an Xbox 360 each! The teams took it in turns to present themselves and their games one by one and I have to say I was blown away by the quality of the presentations by all of the groups. Each had prepared video trailers of their games and many had put a lot of detail into their presentations, some even talked about costings, research, testing and future plans! 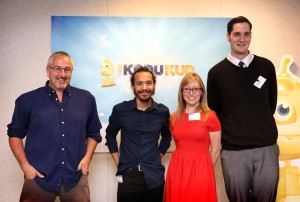 The team of judges (pictured on the left) consisted of myself, Gary Carr of Lionhead Studios, Theo Chin of Indie Skies and Ray Chambers, Head of ICT at Uppingham Community College. As the displays were so fantastic we had a really tough time judging and even ran over our allotted time trying to decide! Our “final three” remained a “final five” up until the last few minutes and then we had the difficult job of deciding the order of the final three. After much deliberation we finally decided on the winning teams as follows: 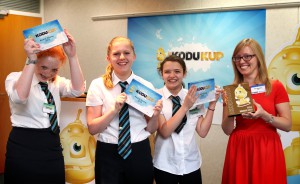 Each of these not only had superb games but also gave very good presentations and I was touched to be the one to present them with their awards. I particularly liked how the girls from Afon Taf High School talked about how they wish to inspire more girls to go into the gaming industry and had even prepared questions for us as judges. They have set up their own Game Studio called Artemis Games and I know they have lots of plans for the future; I am very keen to see what they produce next! The boys from Lister Community School made an excellent remake of Space Invaders with multiple levels and were clearly passionate about the work they had produced. The group from Putney High School was another all-girl group who produced a remake of the arcade game, Labyrinth, but with a Greek Mythology twist, I really liked how they plan to expand their game empire with more Mythology-themed games to educate other children.

I have been so impressed with the standard of games produced for this competition, it’s very inspiring to see so many schools are now using Kodu Game Lab as a tool for teaching programming. I know this competition will be even bigger and better next year as more schools hear about it. You can view all of the final 11 entries on the Kodu Game Lab website. 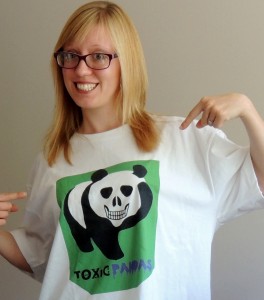 Lastly, some particular highlights for me that I wanted to mention include another entry from Afon Taf High School called Nexus, a Mars-themed game with a great storyline. I also enjoyed playing a game called Kodu Koldasack by the team at Cadaxton Primary, a very addictive remake of Frogger which after many attempts I still have yet to complete! There were also two lovely water-themed games that I really liked which were  ‘Desert Breakdown‘ from Bushfield School and ‘Factory Pollu‘ by Barlows Primary. I also loved the way Barlows Primary had created a whole house style and company logo for themselves with their team being called the Toxic Pandas, they even prepared a goodie-bag for each of the judges which included biscuits, a mug and a t-shirt (which I am proudly modelling on the right!)

This is the end for the Kodu Kup 2013 but keep an eye out for more competitions in the future by checking the Microsoft Teachers’ Blog and following Kodu Kup on Twitter and Facebook! 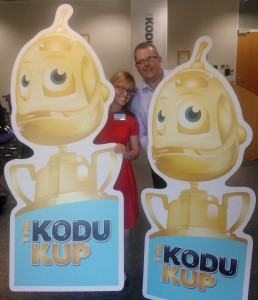 4 thoughts on “The Kodu Kup”