Like many of you, a little over a week ago I attended BETT. I was in attendance for two reasons, firstly to deliver a presentation within the Arena session on Schools and Real Computer Science and secondly to launch the Kodu Kup!

Presenting in the arena was an amazing experience and I was honoured at being invited to be part of the panel alongside Doctor Jo Twist(CEO of UKIE, the leading authority on the UK games industry), Professor Simon Peyton Jones (Principal Researcher for Computer Science at Microsoft), Roger Davies (Director of IT at Queen Elizabeth School) and Charlotte Avery (Head Mistress of St Mary’s School). Here’s a summary of what the session covered:

In my section, I talked about my four main challenges in relation to computing, which were:

The Launch of the Kodu Kup

Following the morning session I was thrilled to be the person to officially launch the Kodu Kup in the UK! I have been working with Microsoft since September to produce resources for the competition and it was great to see it all come together to be launched at BETT. 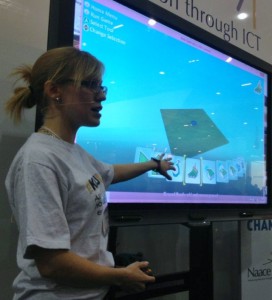 The Kodu Kup is open to any child enrolled in a UK school and who is aged between seven to fourteen years of age. Children may enter competition as individuals or as part of a team of up to three people.

There are three different game themes to choose between, children can either create a retro arcade game, a game to help teach and understand water awareness or a Mars exploration game.

All entries are made by the teacher through the Microsoft Partners in Learning website by the 31st May. The top ten entrants (groups or individuals) will be invited to Microsoft Headquarters in Reading where they will participate in workshops and present their games to a panel of judges. In total three winning entrants will be announced who will each receive an Xbox 360 with Kinect.

It’s going to be an exciting few months and I can’t wait to see some of the entries! To get started with the competition download the Teachers Pack  and keep up-to-date with news about the competition by liking KoduKup on Facebook and following @KoduKup on Twitter.

3 thoughts on “BETT and the Launch of the Kodu Kup”