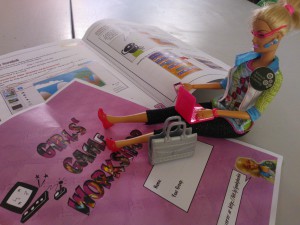 On Monday I ran my first Girls’ Game Workshop at my school. This involved 16 girls taking the role of game developers for two days. The girls in question had been nominated by their IT teachers as suitable candidates and they worked in pairs over the two days. The first day of this workshop began by designing the storyline for their games and the accompanying artwork. We later moved onto developing the artwork on the computers.

I was extremely impressed by the artwork produced by the girls, both on paper and on-screen. They worked really hard on this and most were very pleased with the outcomes. Here are some snapshots of what they produced (click to enlarge).

On Tuesday the girls developed their games using the new web-based version of Scratch, first they imported the graphics they had developed the day before. I guided them through each of the development stages and they completed workbooks throughout the workshop, including entrance and exit questionnaires. 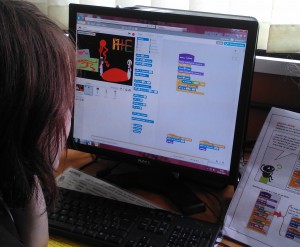 They struggled a little bit when it came to coding their games on the Tuesday. I think this was largely because there were so many great ideas for the games, some were perhaps a little ambitious. In hindsight I should have homed-in their ideas a little bit at the design stage, I was quite blown-away by their enthusiasm at the time and so hadn’t want to stifle them! I had shown them an example game the previous day so they knew the main idea was to produce a game with multiple scenes to unveil a storyline. Many of them chose zombie-style games which surprised me! (I hadn’t realised the trend had moved away from vampires!).

In running the workshop this week I have made a note of some ideas and points to consider for next time:

The quotes were mostly positive, although some requested more time and extra staff, echoing what I have stated above. Here is what the girls had to say about the day:

From the questionnaires I received back; before the workshop none of the girls stated they would consider a career in either IT or gaming which I found very surprising. Upon completing the exit questionnaires 4 answered “yes” or “maybe” to the same question. I must point out that a fair number had already chosen specific career paths, such as paleontology, performing arts, child care, teaching etc. but I was very surprised that so many did not see the IT industry as a potential career option. I took the ideas for my entrance and exit questionnaires from Belinda Parmer’s book, Little Miss Geek (a recommended read if you’re interested in this issue). I will do a more detailed write up  on my findings from this questionnaire and other research at a later date

Running this workshop has certainly highlighted, again, what a huge issue this is and has motivated me even further to pursue my quest in inspiring girls into the industry!