On Monday I was lucky enough to attend the launch party for #include, a subgroup of Computing at School (CAS), which aims to increase the diversity of students studying computer science. I was invited to be part of the panel discussion which followed some interesting keynote speeches by Kate Russell from BBC Click and Amy Morris, a student from Sheffield Hallam University. Before the keynote speeches the evening was introduced by the chair of the #include group, Laura Dixon. 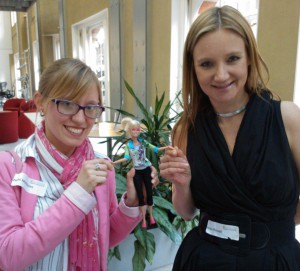 Kate opened up her speech by telling us about her journey into technology and spoke of her love of games as a girl. She became interested in programming when a BBC Micro computer was bought for her brother; raised in an era when “girls subjects” and “boys subjects” were very separate she became disinterested in school but luckily managed to hold onto her fascination of games and technology and has made a career from them, now being a TV presenter and writer. She spoke passionately about the subject and is really keen to encourage more girls to pursue an interest in technology.

Amy’s keynote was next and she told us about the extensive research she has carried out for her dissertation around gender equality in the field of computer science. As part of her research she found that many secondary school girls did not enjoy their ICT lessons and didn’t see it as ‘useful’ for their future. After running workshops with some of the girls, teaching them how to create web apps, she discovered that many of them lacked confidence but as the workshop progressed they thrived and really enjoyed the experience; from completing exit questionnaires she discovered that the girls opinions of IT had now changed and also noted that they preferred working in an all female environment. One of Amy’s final points was that girls-only clubs could help to keep girls interested and maybe make them continue with it at GCSE and A-Level. I think Amy was spot-on with the discoveries she has made and I, too, am planning on running some girls-only workshops in the next term.

After the keynote speeches was the panel session where the audience were encouraged to submit questions via Twitter. The panel consisted of myself,  Dan Bowen, LEA Advisor  to Surrey schools and Phillip Bryant, Qualifications Group Manager of ICT from OCR, the panel was chaired by Carrie Anne Philbin, Vice Chair of the #Include Group and founder of Geek Gurl Diaries. Throughout the panel discussion a number of points were discussed and the ones I can remember are explained below:

One of the first points that arose was the need for strong role-models to help encourage girls into IT and Computing. This is something I am passionate about and I feel is very apparent within the area my school is located (Margate in Kent). There are no big IT companies close by so many of the girls don’t know any women who work in the industry so may not view it as a feasible career option (I’m hoping to carry-out some research in this area over the next few months). As you may know I have been addressing this very issue myself through my website Geeky Barbie’s Travels, interviewing women in the IT & Technology Industries.

We were asked what practices we found useful; I discussed how I try to keep to gender-neutral topics wherever possible so as to engage as many students as I can. One example I explained was the creation of a virtual pet in Scratch within my year 8 scheme of work, both genders seem to like this as the girls enjoy creating their pet and nurturing it whereas the boys like to see what happens when they don’t feed it! My year 9 students at the moment are about to build a quiz app using Touchdevelop and I will be giving them free-rein to choose the topic for this, knowing many of my girls will choose their favourite boy-band as the subject! I have taken the idea of this from OCR’s Entry Level Computing course which was also referenced by Phillip on the panel.

Dan gave some advise on starting a coding club and talked about the importance of giving the club a clear structure with clear goals each session, similar to those found in a lesson. I discovered the same thing myself when I ran a club last year around ‘Kodu Olympics’, having a goal to work towards helped to keep the students focussed (they also liked the idea of a prize at the end of course!)

There were lots of other points raised throughout the discussion as well and if you wish to find out more you can check out the video stream and Twitter feed of the event. Finally I can’t close without sharing the wonderful visual minutes from the event, drawn by Creative Connections, it was amazing watching the artists in action and I was really impressed with their visual snapshot of the evening: 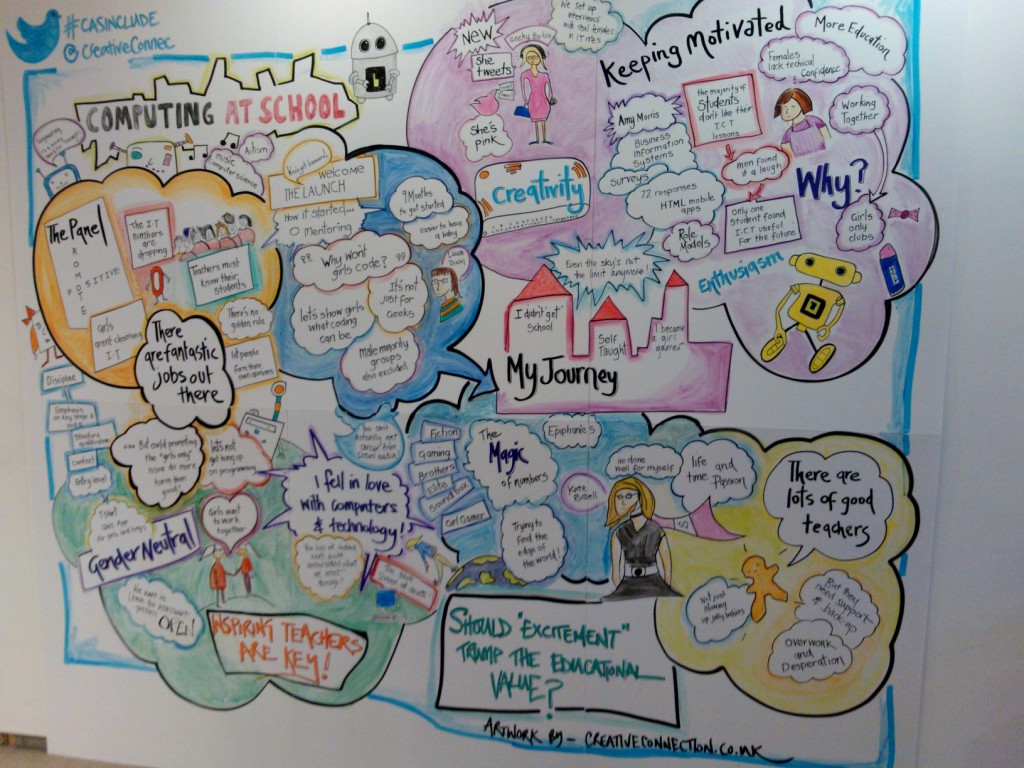